Saad B. Omer, MBBS, MPH, PhD1; Avnika B. Amin, MSPH1; Rupali J. Limaye, PhD2
Author Affiliations
JAMA Pediatr. 2017;171(10):929-930. doi:10.1001/jamapediatrics.2017.2219
The continued success of vaccines, one of the most effective public health interventions, depends on high rates of acceptance. Vaccine refusal in the United States has increased since the late 1990s.1 This trend has coincided with an increase in vaccine safety concerns. Such concerns result from easy recall of adverse events, misinformation, and human tendency to poorly judge probabilities. When a significant proportion of the US population is impervious to scientific facts, such as belief in human-induced climate change, it is difficult to communicate vaccine-related information to patients.
Full article
Tweets by SPUC 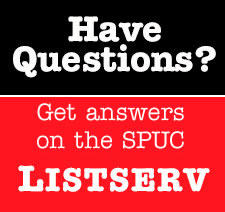 The SPUC Listserv is available to all SPUC members. Access the Listserv through the member section of the SPUC website.